The International Business Brokers Association (IBBA) and M&A Source have released their Market Pulse Survey for the second quarter of 2020. The survey was created to gain an accurate understanding of the market conditions in the United States for businesses being sold in Main Street (values $0-$2MM) and the Lower Middle-Market (values $2MM -$50MM). The national survey was conducted with the intent of providing a valuable resource to business owners and their advisors. For the first time in survey history, median multiples dipped below 2.0 for the smallest Main Street businesses. Notably, other Main Street businesses matched market peaks. In the context of the Canadian market, businesses in Canada typically sell for lower multiples than those in the United States. Generally, Canadian valuation multiples are 10%-25% lower, but this varies based on the industry a company operates in and other risk factors of the business. 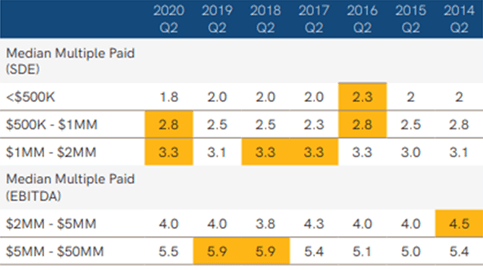 In Q2, median final selling prices came in anywhere from 89% to 100% of the pre-set asking price or internal benchmark. Lower middle-market companies in the $5 million to $50 million range achieved the highest values at 100% of the benchmark.

The majority of respondents in the survey indicated they expect valuation multiples to either stay the same or decline in the next three months. The majority of respondents also predicted that the number of new businesses listed for sale will increase in the next three months. These predictions indicate that the market will continue to be a buyer’s market in the short term.

It appears that while many buyers left the market in Q2, the flow of deals was also down considerably from 2019 which led to the market remaining competitive. If your business has remained steady or flourished during the recent economic downturn, now may be a good time to sell. Businesses with less risk and steady cash flow will likely receive a premium in comparison to  businesses in an industry adversely affected by COVID-19.

To learn more about selling your business, click here.