The International Business Brokers Association (IBBA) and M&A Source have released their Market Pulse Survey for the fourth quarter of 2019. The survey was created to gain an accurate understanding of the market conditions in the United States for businesses being sold in Main Street (values $0-$2MM) and the Lower Middle Market (values $2MM -$50MM). The national survey was conducted with the intent of providing a valuable resource to business owners and their advisors.

Valuations for small and medium businesses held strong in 2019, remaining at or above market peaks. In the past year, median** multiples never varied more than 0.2 points in any market sector, and Q4 2019 ended on par with the year prior. 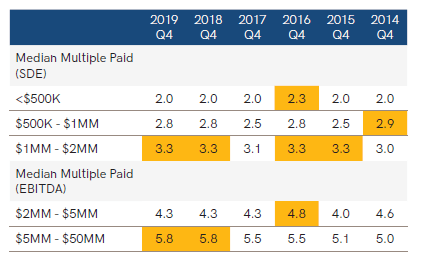 Generally, business brokers and M&A advisors expect more of the same in 2020. While they do expect deal flow and successful closings to grow, advisors predict a negligible uptick in multiples this year. Specifically, 55% of advisors predict the volume of deals (under $50 million) will increase in the next 12 months, but only 7% expect an increase in multiples.

In the context of the Canadian market, businesses in Canada typically sell for lower multiples than those in the United States. Generally, Canadian valuation multiples are 10%-25% lower, but this varies based on the industry a company operates in and other risk factors of the business.

To learn more about selling your business, click here.